Dedicated to provide the best quality water to the Lake Meridian area at the lowest possible price.

Learn how to save water. 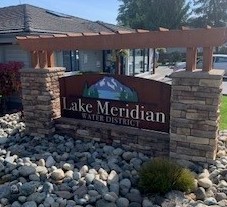 Lake Meridian Water District is a special purpose district, operating under Title 57 of the Revised Codes of Washington, (RCW).

We were originally formed in the early 1960s to bring water service to the Lake Meridian area. The District's current service area covers approximately 4,000 acres around Lake Meridian in Kent, Washington.

We are bordered by the City of Kent to the west; Soos Creek Water & Sewer to the north; Covington Water District to the east; and City of Auburn to the south.

The District has a three member Board of Commissioners elected to staggering six-year terms of office.

The Board meets twice per month at the District office. If you are interested in attending, please advise. The day to day operations are the responsibility of the General Manager, Operations Manager and 8 full time employees.